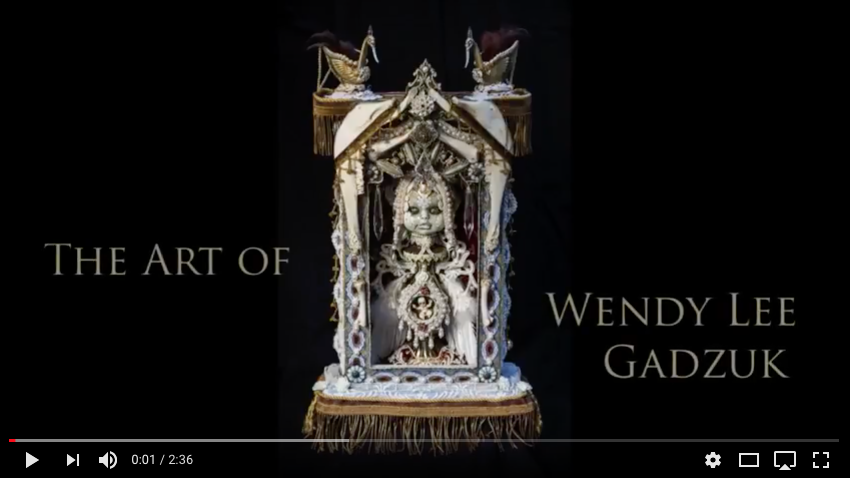 “The Light Fantastic,” my two-woman show with Kate McCabe at La Matadora Gallery in Joshua Tree, has come to a close. It was a wonderful show, and I am grateful to Colleena Sabatino for hosting our work there for the past month. This is such a cool addition to the local art community!

I had some moving, magical moments at the gallery while I was installing my work, and I’m glad I had the opportunity to do so without feeling rushed. My piece, “The Padded Cell,” really took on a new life for this show. I allowed myself to take it in and listen. Magic, after all, is what transforms things. Isn’t this what art is about? So I thought I would share my statement for the show here with you:

Magic. To me, this is what the creative process is. “The power of apparently influencing events by using mysterious or supernatural forces.” Changing reality. My tools laid out in front of me, as on the magician’s table, I begin to work, to change the reality of the discarded items headed for the trash bin, or of the clean, white sheet of paper. I create altar-like assemblages using bones, doll parts, antique hardware and other found objects, which become pieces that hold space for forgotten spirits. I also draw. I draw with a ballpoint pen, entirely freehand, usually symmetrical, with no pre-conceived idea as to what will manifest on the page. Some pieces hint at a human form, some animal, some alien, while others are a tangled web of flora-like tendrils. Most are a combination of all of the above, becoming Gods and Goddesses, or mystical talismans of worlds unknown. These are my meditations, an unfiltered view into my subconscious mind, which I believe holds a small thread connecting us all.

My years as a practicing musician have influenced my work as well, most notably, in this show, in “The Padded Cell.” The entire piece is housed in a guitar case. Old sheet music lines a compartment with a bright red, spiked heart, illuminated by a small red light. Used amp tubes and guitar picks line the perimeter while the doll on the inside is trapped behind a cage of guitar strings, beautiful, yet barely visible amidst the glitz and glitter surrounding her. Life force, however, is still abundant here, and this is her channel for communication, through her music. Trapped, yet transcendent. She was created by tapping into the magic of the creative process, and she uses the magic to keep creating. The cycle continues. It always does.

Meanwhile, I’ve been in a bit of limbo. I’m still working on getting my studio up and running after my move, and my mom has been visiting me for the past month, which was great, but a bit longer than expected due to an injury caused by my neighbor’s dog (which she is recovering from quite well), so my attention has been elsewhere. And then, I haven’t been feeling well for the past few days, which always gives me way too much time to think. So, instead of doing nothing, I decided to put together this short video of some of my assemblage work set to the soundtrack of my band Andalusia Rose‘s song “Destroyer,” from our record “First Stone.”

This was both fun and frustrating, but I’m glad I did it! Enjoy! Feel free to share:

You can follow this blog by entering your email address below, if you are so inclined! Cheers!