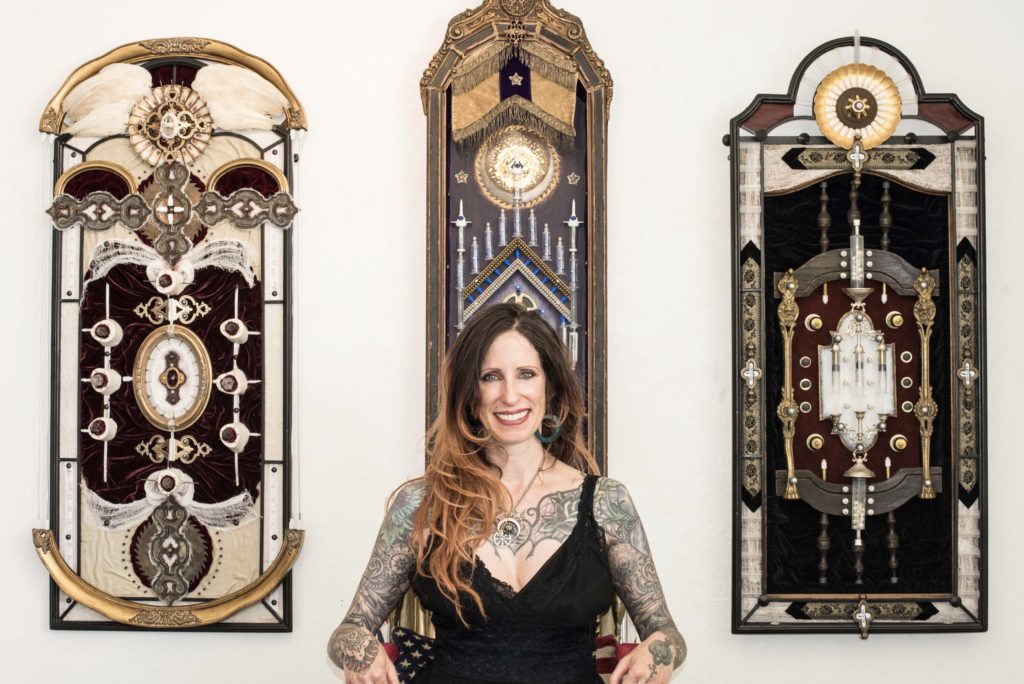 “In my work, I strive to illustrate a balance between the constraints of the physical world and our desire to connect with it, and the infinite possibilities of the divine. Symmetry plays a big role in my visual language, yet it is imperfect symmetry. Natural symmetry, which I believe we subconsciously respond to, allowing me to create a body of work that speaks of the many aspects of the human experience, both physical and spiritual. Treating discarded objects as precious, I aim to create a world that illuminates the beauty the dark side, speaking to the hollow, empty spaces in our psyches.
A recent move from the gritty streets of East Oakland to the Mojave Desert has been visually and mentally stimulating for me, creating more space to receive inspiration and information from my surroundings. Nature, infused with otherworldly messages and iconic imagery, continues to be a theme in my work, as well the feminist aspect of simply being a female artist. I am happy to be in a place that encourages this, while also reminding me of the impermanence of each phase of the human condition. Death is everywhere, every day, and the desert is not ashamed of that.”

“She is very sensitive to the small, delicate beauty in the world that so many of us pass over.” – Wendy’s nursery school progress report, 1975.

Wendy Lee Gadzuk is an artist, musician, writer, and diviner, living and working in the Mojave Desert.  Wendy grew up an only child in the suburbs of Washington D.C. The solitude of being a “latchkey kid” of divorced parents combined with the visual and mental stimulation of traveling Europe during her formative years created fertile ground for dark ideas. Her love of the beautiful and the ornate led her to study jewelry and metalsmithing at University of the Arts in Philadelphia, receiving a BFA with honors.
Religious and occult imagery are recurring themes in Wendy’s work. A traditional intensive Byzantine Icon Writing workshop taught by the Prosopan school from Russia has recently given her a new layer of spiritual, visual, and technical tools to work with. Drawing from our universal connection to the divine, taking cue from the patterns found in nature, architecture, and music, Wendy works in various mediums. Some pieces manifest as mixed media assemblages of deconstructed icons, where found objects, animal bones (often found close to home), doll parts, antique hardware, broken jewelry, and, more recently, medical waste, are transformed into altar-like structures that are meant to hold a sacred space for forgotten spirits. She also works 2-dimensionally, creating finely detailed,  symmetrical (yet entirely freehand) meditative drawings/paintings, which begin as sketches with no preconceived idea as to what will emerge on the page. This is where the magic happens. Sigil work is sometimes incorporated into the drawings. This style of working has proved to be a productive counterpart to the constant thinking and problem-solving involved in the assemblage pieces. They are totally contrasting methods, yet the work holds a similar thread, connecting in its own way to the collective unconscious.
Wendy toured the country with her old band The 440s several times, including a spot on the Van’s Warped Tour in Philly, and an opening gig for Motorhead (R.I.P. Lemmy.) She has worked as a background actor in various projects, including a Korn video, a few episodes of the TV show “My Name is Earl,” and “The Thirst” and “Wizard of Gore” (featuring Crispin Glover), two splatter/horror films directed Jeremy Katsen, the latter being a remake of the 1970 film by Herschell Gordon Lewis,
Wendy’s work has been featured on the cover of her band Andalusia Rose’s records, seamlessly combining her passions. She has created assemblage pieces as part of their live show as well. She recently did the artwork for Wino’s (the Obsessed/St. Vitus) new solo record on Ripple Music, Forever Gone. She has exhibited her work in several galleries in California and beyond, regularly showing at Los Angeles’ Hive Gallery and La Luz de Jesus. She is also a part-time curator at La Matadora Gallery in Joshua Tree. Her artwork can be seen in several online and print publications, including Oakland Magazine, SF Bam, and Dirge Magazine, as well as Out of Step Books “Black & White Volume Three.” Her writing has been published in two current books available on Amazon, “The California Hi-Desert Artists,” and “21 + 1: The Fortune-Teller’s Rules.”