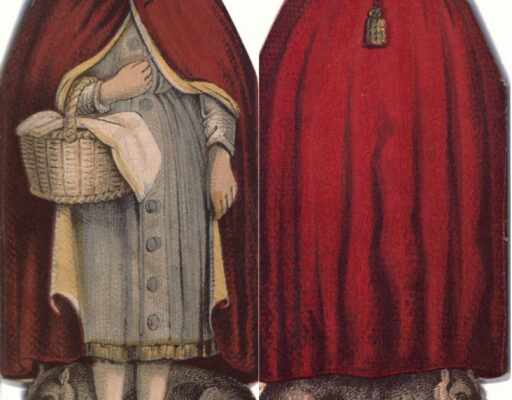 I’ve been studying with Camelia Elias for several years now. It started with a class called Cards and Magic, where I was introduced to the beauty and simplicity of her “Read Like the Devil” method of working with the Marseille tarot. I got a lot more than I bargained for. Her classes are life-changing.

Recently, we have been working with the idea of opening the heart. We use tarot cards to answer questions about ourselves, and to give us a deeper understanding of the questions (because the answer always lies within the question).

We were asked to write a fairytale based on two separate two-card draws.
“What two archetypes from fairytales do I embody?

I decided to re-familiarize myself with the first fairytale I could think of, which was Little Red Riding Hood. And then I realized how appropriate these cards were for rewriting this story, from one of the main character having no agency – even when she and her grandmother are cut out from the wolf’s belly (in the Brother’s Grimm version), unharmed, it is because someone else (a man, of course) rescues them – to one where the main character becomes the animal tamer, or has the agency.

Once upon a time, there was a little girl who lived near the forest. She loved the red velvet riding cap that her mother made for her so much that she wore it every day. She soon earned the nickname “Little Red Riding Hood.”

One day, she decides to take a walk through the woods to deliver cake and wine to her grandmother, who her mother informs her is ill. She hopes to cheer her up. Her mother warns her not to venture off the path, and to go straight to see her grandmother. “Of course, mother.”

As she strolls along the path through the woods, a wolf spots her, as he hides behind a tree. Hungry, he has his eye on the cake that he smells in her basket, but thinks she looks delicious as well.

“Good day,” he says. She returns the greeting, while still looking straight ahead. “Where are you headed?” he asks.

“To see my grandmother, who is ill,” she replies.

“Where does she live?” he asks slyly.

“Oh, just at the end of the trail and off to the right, by the big oak tree,” says Little Red Riding Hood.

The wolf smiles to himself, now knowing that a tasty treat lies ahead, as well.
“I bet she would be thrilled if you brought her some of these lovely flowers over here in this field, along with your goodies,” offers the wolf, hoping to buy some time.

“Yes, I do suppose she would love some flowers. Thank you.”

Little Red Riding Hood wanders into the field, past the wolf, and heads toward the colorful array of blooms. “These should lift Grandma’s spirits,” she thinks to herself. As she passes the wolf, she notices an odd gleam in his eye, and she becomes unnerved as she catches a glimpse of the sharpness of his teeth. She scurries toward the cluster of orange wildflowers and then looks back, making sure there is ample distance between herself and the wolf, so that she could quickly get away if she felt threatened. He was gone. “Phew. Now I can gather flowers in peace.”

She picks a handful of bright blossoms, thinking how happy her grandmother would be upon seeing them, when suddenly she realizes that she had just told this manipulative and potentially dangerous creature exactly where her grandmother lived. Now, after seeing that evil smile, she wasn’t so sure he should be trusted. How maddeningly disarming he was, suggesting that she gather wildflowers. She throws the few flowers that she has gathered into her basket and runs just as fast as she can to her grandmother’s house, hoping to arrive before this wolf can do any harm to her. As she runs, she hears a strange rustling in a nearby tree, which she then sees is a big black bear, climbing its branches. “Oh dear, I better run faster.”

As she reaches the house, she sees the wolf about to approach the door, salivating. “I knew he was up to no good,” she thinks. “Good thing I trusted my instincts instead of him.” She reaches into the basket and breaks off a large piece of cake.

“Hello again. What brings you here?” she asks.

“Oh, um, just continuing on my afternoon walk,” he stammers.

As she cautiously moves toward the door, keeping her eye on him, the wolf suddenly leaps to her, teeth bared, telling her how delicious the cake smells and that she does, too. She quickly grabs the piece of wood holding the door in place and tells him to get back.

She takes the piece of cake that she broke off out of the basket and teases him with it. As he starts to slowly move toward it, she draws back her arm and throws it toward the tree where she saw the bear. The wolf’s eyes follow the cake, and soon his legs do, too. He sprints toward the lump of baked treasure, which flies right by the bear, still in the tree. Just as the wolf reaches the cake, the bear jumps from the tree and lands on him, devouring both the wolf and the cake.

Little Red Riding Hood enters her grandmother’s home, and they enjoy the rest of the cake together, while her grandmother sips the wine, which rejuvenates her.

“What lovely flowers you brought. Where did you find them?”

My heart opens as I step into my power.