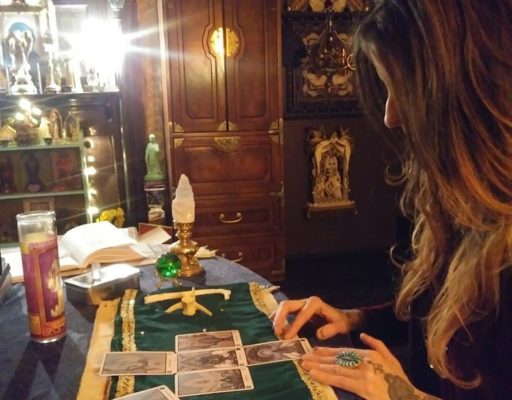 “What is your message for me?” I ask the cards.
The Fruit, The Crossroads, The Bat, with The Portal as the surprise card on the bottom of the deck.

“Ripe on the vine, you hit your mark. Now try to do it upside down with your eyes closed. Welcome to a new dimension.”

One interesting thing about creating your own oracle deck is that you have no idea what it is like to read with until you have it in your hand, already printed and ready to send out into the world. Deconstructed Divination, a 44-card, 4-color oracle deck that I created, came together fairly quickly. This was something I had been wanting to do for quite a while, but I wasn’t sure how to approach it. Do I want to do a traditional 78-card tarot deck? Quite ambitious, but it will probably happen sometime in the future. Do I want to create my own imagery and cards, connecting to different threads of information than the tarot? There is something to be said for each. The strong history and the energy of the collective consciousness surrounding the already realized 78 cards of the tarot has power in and of itself. Creating my own world is an intriguing and seductive idea as well.

When Colleena Hake, owner of La Matadora Gallery (where I have been co-curator for the past year) suggested that we team up and put together a group show in December, crossing over into the new year with an oracle theme, of course I agreed. And of course I would have to create a deck for the show. In less than 2 months. Oh crap…what have I gotten myself into? Think fast. Creative spontaneity has not always been my strong suit, but I was about to dive in. Ok, I must be realistic. Creating work for a deck entirely from scratch, having it laid out AND printed in less than 2 months was probably not going to happen, as my work takes time. I’m not fast. BUT…I do have a collection of incredibly detailed ink and graphite drawings that contain hidden images and unlocked symbols already in existence. What do they say? What do these little pockets of information become when they are isolated and zoomed in on? What an exciting adventure, to newly discover what is already there.

After I did the math to find out the proportion that the image needed to be to fit onto the size card that I wanted to get – so many decisions! – I began madly cropping my already existing drawings from the past 4 years into tantalizing newly realized forms. I had no idea how many. I just kept going. Got it. Ok, now what are they? This project was liberating in the sense that I had absolutely no time to second guess what I was doing. I trusted that something was guiding the process and just did what was in front of me. I wrote out a list of what the images appeared as to me. I knew it would be around 50 cards. Somehow, 44 seemed right. I could then do 11 cards in 4 different colors. 44, 11, 4. Nice. A few wouldn’t make the cut. That’s ok. I printed out the images in black and white on cardstock, cut them out, and decided which ones would correspond with which color. Without overthinking. Rose, blue, violet, and green. Good combination. Passion, coolness, spirit, and earth (or money). I handpainted each one with watercolor, creating “suits,” if you will. More like moods, as opposed to the elemental representations of the tarot with earth, air, fire, and water. I lay them out and organize them by color – starting with blue, then green, rose, violet. How do they make sense? From the Cosmos (1) comes Chaos (2). Through the Portal (3) we can still see the Moon (4), but if we Focus (5), we can see the Tree(s) (6) down below whose wood turns into the Cross (7). With Time (8) we move into the earthly plane, starting with the Pod (9) whose seeds drop and Fertilization (10) is inevitable. We move through plant and animal and human forms, flora and fauna. Halfway through, we reach the Crossroads (22), after which we meet the Queen (23) and the King (24). The Blade (41) eventually comes down on this journey and there is a Transformation (42). We look back at the path we have walked, like a Spy (43) peering through the brush, and once again we are lifted back to the cosmos, where we began, this time wearing the Celestial Crown (44). A similar path to the Fool’s journey in the tarot, but with some different destinations.

The gray and black squares around the numbers came later. Rose and blue are gray, violet and green are black. These can be helpful in adding nuanced information to readings. The gray can suggest looking for subtleties in a situation, while the black suggests a more direct approach, but never overriding the main image on the card.

The small booklet that comes with the deck has few specific instructions on how to read each card. “Read what you see,” is what was taught to me, in large part by my mentor Camelia Elias, who is also fond of “Read[ing] like the Devil.” And NEVER read without a question, if you want clarity. Context is key. This is why the cards can mean so many different things, given different situations. In the short time that I have had this deck, I’ve read Tension as guitar strings, and the Crown as a drum, in addition to outward family appearances.

My second reading with this deck was unexpected, at the gallery, the day after the opening. A young couple came in with their daughter, and they were intrigued by the cards. The woman asked me to read for her husband.
He asked a general question, “What will happen this year?”
I did a 5-card do/don’t spread. The Goddess, the Jellyfish, and the Pod, with the Shield in the “do” position, and the Serpent in the “don’t” position.
“Do you want more kids?” I asked, pretty sure that the answer was no, based on the cards. They laughed and said no. “Use protection,” I said. The Goddess is fertile, while the Jellyfish appears quite phallic in this context, wedged between the Goddess and the seeds of the pod, a powerful symbol of creation. The Shield in the “do” position…well, yeah. Shield that shit. Don’t let that Serpent run wild and free.

After the reading, I went into the bathroom, aka the Loovre, where Mark Bloom’s Curated Mayhem, a collection of rescued thrift store and trash bin art hangs on the wall, and I saw the answer, once again, right there. “Always Use Protection.” Yup. Always pay attention. The answers are usually right in front of us!

I leave you with this. I ask, “How can I best utilize these cards?”
The Rose, The King, The Crystal, with the Moon on the bottom as the surprise card.

“Observe and examine the feminine aspects in the masculine to gain clarity. The Moon laughs because it’s all just an illusion, anyway.”

Yes. I know. The cards ARE very feminine. I’ve been told I’m constantly drawing vaginas, though it really is unintentional. Of course the Yoni card was intentional, but usually it’s just what comes out. There are a couple of intentionally masculine cards – the King, and the Rocket – but there is a lot of female in these cards. Take what you like from that. I’m curious as to what that may be. Please feel free to let me know. And enjoy!

Stay tuned here for more posts, including a more detailed description of the cards, once I’ve gotten more use out of them. Deconstructed Divination is available in my webshop. I’m tickled and humbled by the support I’ve gotten with this project!