Skip to content
It’s been a while since I’ve posted. Not for lack of things to say, but perhaps for lack of knowledge as to how to say them. My focus for words has not felt sharp. When this is the case, I must continue to produce, in whatever way feels sharp. I’ve been creating with objects and pens and pencils and colors, not with words. And now it’s time to use words to speak of these products of continual creative output, in spite of feeling not sharp.
In August, after some pretty intense care-giving/wound care for my boyfriend (who is also an awesome artist/musician) who had sepsis, I created a large assemblage using our ever-increasing pile of medical waste. 42 syringe caps, 26 rubber syringe stoppers, 31 syringe plungers, 5 syringe tubes, gauze, and Medline bandage packaging all came together to create this large altar honoring the horrible experience and beginning the healing process. As I look back on the date of completion on my Instagram feed, I feel quite sad realizing that Tony still has never seen this piece in person, as he went to the hospital again for surgery (unsuccessful) on August 10th, which was about a week before I finished, and he has not returned home since. I miss him. 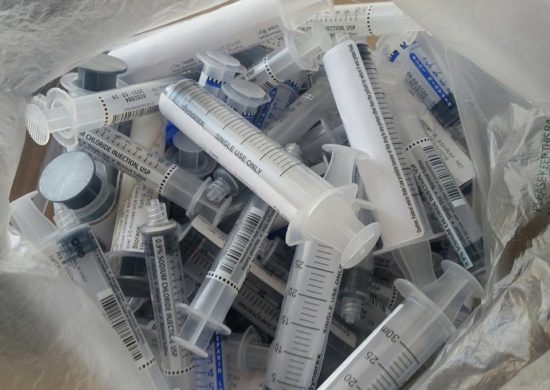 I wasn’t sure what I wanted to call the piece, but it kept resembling a Tree of Life to me, and that seemed fitting as these elements that made up the piece contained the things that gave him his life back. Tree of Life it is. It’s solid, it’s sturdy, it’s heavy and it holds power. I was happy to have finished it just in time to have it included in the “Desert Icons” exhibition at the Yucca Valley Visual and Performing Arts Center, a beautiful new space that opened in the hi-desert this past summer. This was their second show, and it was an honor to share the walls with so many brilliant desert artists. I even got to speak at the panel discussion, which was quite special. 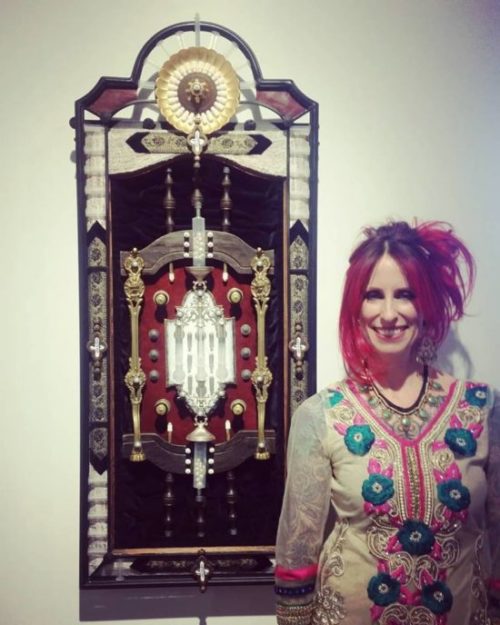 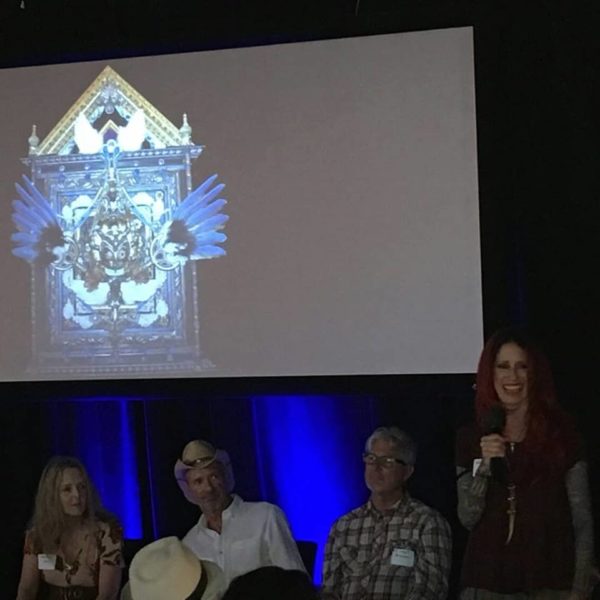 As always, my creative process is a constant balancing act. I sat in the waiting room in September at the hospital in Joshua Tree, waiting for a mammogram, and I began to sketch. It had been a while. There was a sign on the wall that said “Emergencies are not planned events.” I wrote that down, as it somehow seemed profound. I sat and drew while I waited for what was a planned mammogram. I did not plan for this to become the building block for a breakthrough piece for me. I brought it home and realized that the Kabbalah tree of life fit over it perfectly. I had new heavy cotton paper and watercolors, and I wanted to experiment. I was always too scared to mess with a pristine ballpoint pen drawing that I may have spent 60+ hours on, even if I was curious what it may look like with a little paint splattered here, or dribbled there. Wasn’t worth the risk. So I had to begin with the mess, and build on top of it. Watercolor, gold leaf over clay bole (which I learned how to do at the icon writing workshop I took last year), graphite, colored pencil, a few dabs of acrylic paint, and, of course, my trusty Bic pen, all layered on top of one another to create this world of ordered chaos – a kind of decaying precision. It shimmered. I loved it. I really don’t know how to draw or paint. I don’t know how it’s “supposed” to be done. I just do it, and I learn how and when to control the mediums, and when to let the materials take the lead. This was the perfect balance of both. 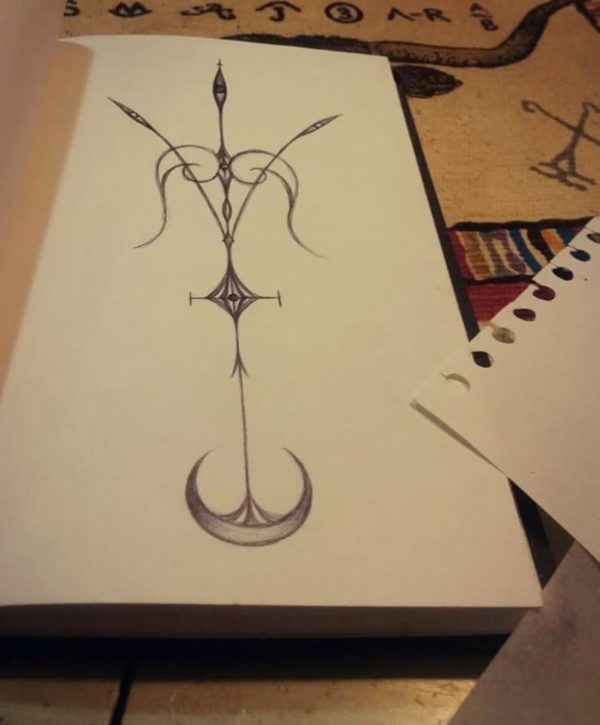 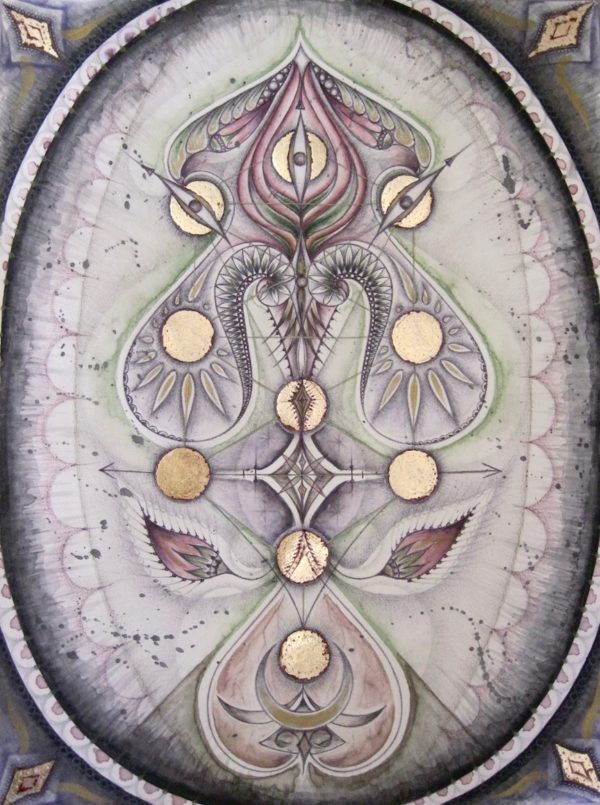 Now I have a “Tree of Life” on paper, too, the fruits of which are supposed to, on some level, grant us eternal life. Moon energy sits below the earth, holding the roots from which the eternal tree grows, producing seeds that offer constant regeneration and renewal.
And then – October 27th, 2018, 11 people were killed and 7 were injured at the Tree of Life Synagogue in Pittsburgh due to a deranged man with a gun in his hand and hate in his heart. I hope there is some sort of eternal life for the spirits of the people who left this earth in such a seemingly horrible way. I don’t even know what to say about that. I try to trust that there is a regeneration of the seeds of hope and love that brought them to this place to begin with, and that that lives on. Kabbalists believe the universe exploded out of a place of infinite nothingness beyond our comprehension. There is much we can’t comprehend, and sometimes it’s best not to try. Just keep doing.
RIP:
Joyce Fienberg, 75, of Oakland
Richard Gottfried, 65, of Ross
Rose Mallinger, 97, of Squirrel Hill
Jerry Rabinowitz, 66, of Edgewood
Cecil Rosenthal, 59, of Squirrel Hill
David Rosenthal, 54, of Squirrel Hill
Bernice Simon, 84, of Wilkinsburg
Sylvan Simon, 86, of Wilkinsburg
Daniel Stein, 71, of Squirrel Hill
Melvin Wax, 87, of Squirrel Hill
Irving Younger, 69, of Mount Washington
On a “doing” note, I have a piece in the Master Blasters of Sculpture show at the Hive Gallery in Los Angeles, which opens Sat. Nov. 3rd and runs through Dec. 2nd. Join us for the opening if you are in town!
And here is a little interview I did recently with Voyage Phoenix Magazine, as well.
Thanks for sharing this crazy journey with me!! Keep on shining. It’s all we can do. Drop me a line to let me know how you do it, if you like.