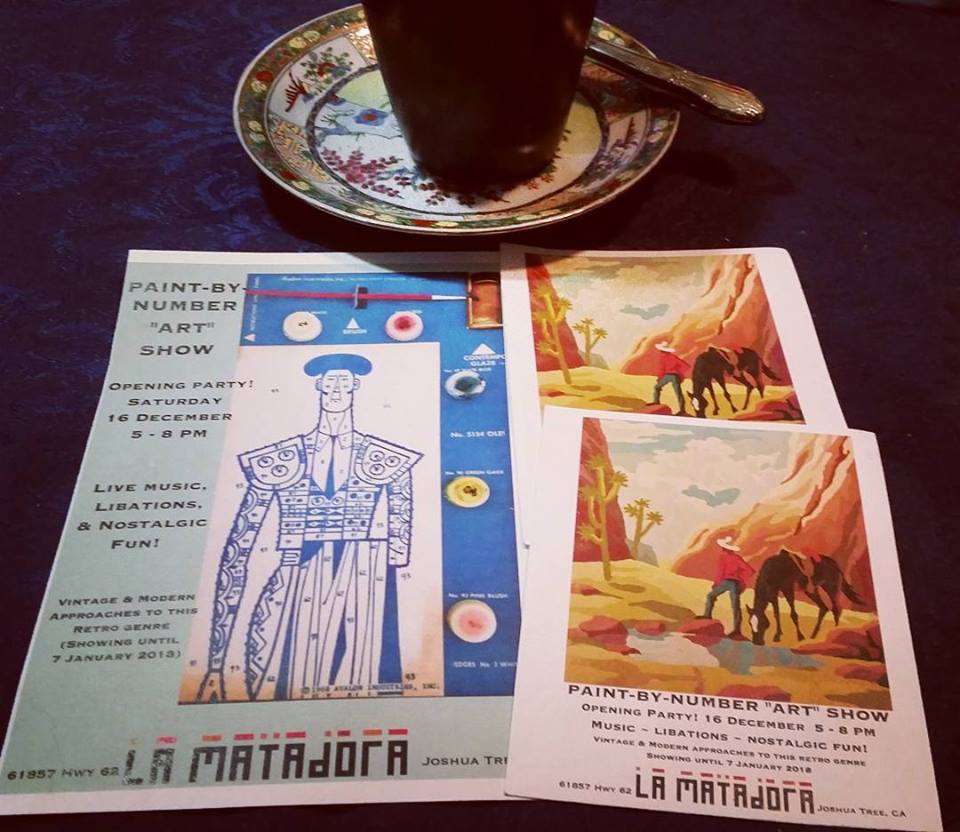 I remember a couple years ago being on tour with my band Andalusia Rose. Our friend Craig, an insurance agent who is neither a musician nor an artist (though a big supporter of both) was with us, helping us out. After a couple shows, and seeing the immense cost and effort that was put into playing a few shows with uncertain outcomes both financially and turnout-wise, he asked me, in a completely non-judgmental way, “Why do you do this?” Hmmm. Because it’s what we do. I didn’t know how else to answer that. He, being an avid outdoor athletic type, was talking about how he drove something like 200 miles to run a 5-mile race. I told him it’s pretty much the same thing. Some things don’t make sense, but we do them anyway. Indeed.

Colleena Sabatino, who recently opened the fabulous La Matadora Gallery in Joshua Tree, asked me if I wanted to be in her upcoming Paint-by-Number show. Sure, I said. That sounds fun. I had many projects on my plate, including my first assemblage piece since I moved to the desert for an upcoming Tarot show at the Hive Gallery in Los Angeles (opens Jan 2018), but I figured, this will be easy. I’ll knock it out in a few days. We unrolled it on Thanksgiving, and ….wow. Yup, I had my work cut out for me! The owls were not going to come easy. I got started that night, worked for hours painting in tiny little spaces in white, then cream, then tan. Barely made a dent. This was the test….would that feeling make me want to give up or continue? I was hooked!

When my dad found out what I was doing, he asked, “Well, um, what makes for a good paint-by-numbers painting vs. a bad one?” For starters, it’s only good if you do it. Which most people don’t. It takes too damn long. We, as a society, don’t have time for things that don’t make sense. I had time (kind of). My mom asks, “Why on earth would you do that?” Meaning (I suppose it was a compliment) why would someone like you, who is an artist who is capable of creating her own work, spend hours painting in little tiny shapes of pre-determined color? It then occurred to me that the whole nostalgia/kitsch aspect of this practice was probably lost on them. The whole idea of this show, this coming together of a community of established, accomplished artists, with those who only dabble, and those who collect (this show includes found/thrifted paintings as well), with no hierarchy is a beautiful thing. And I had fun texting pictures back and forth with Colleena sharing our progress, and seeing others posting theirs on Facebook as well. It is a group process, and that is important, especially when being an artist can feel so isolating. 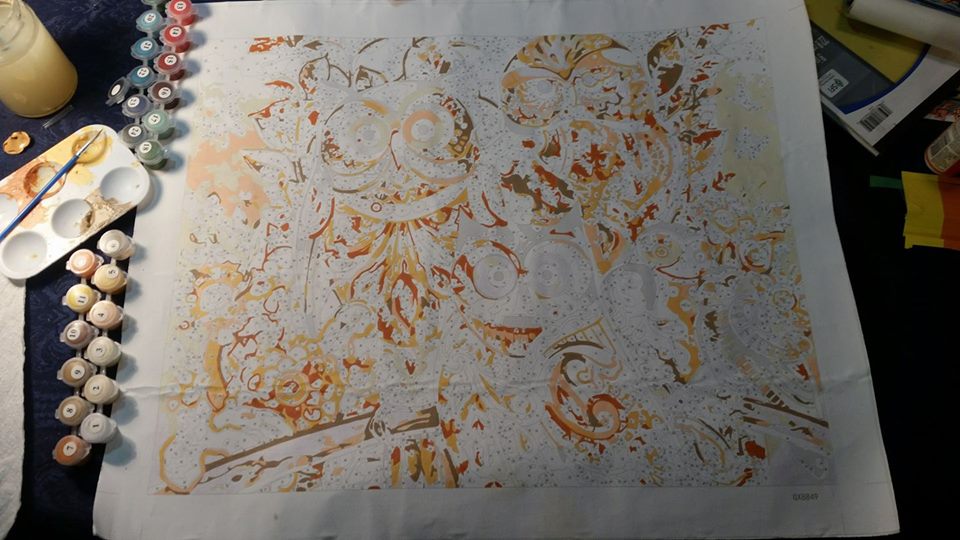 The (non-) painting ended up taking around 80 hours. My eyes were blurry by the end, but I had a great time watching these beautiful, colorful owls emerge on the canvas.  I kept thinking of my little burrowing owl friends down the street as I painted, and I would see them sporadically throughout the process. So, let’s see. If I were to give myself minimum wage for this painting – that would be 80 hours at $10.50, plus $20 for the frame, and then the standard gallery mark-up of 50% – this would put this piece at $1,720. Is it worth it? Who can answer that. Would anyone really pay that much for a paint-by-number piece? Probably not. Did it make sense, financially, for me to spend my time on this? Of course not. Are we truly living when everything we do has to make sense? 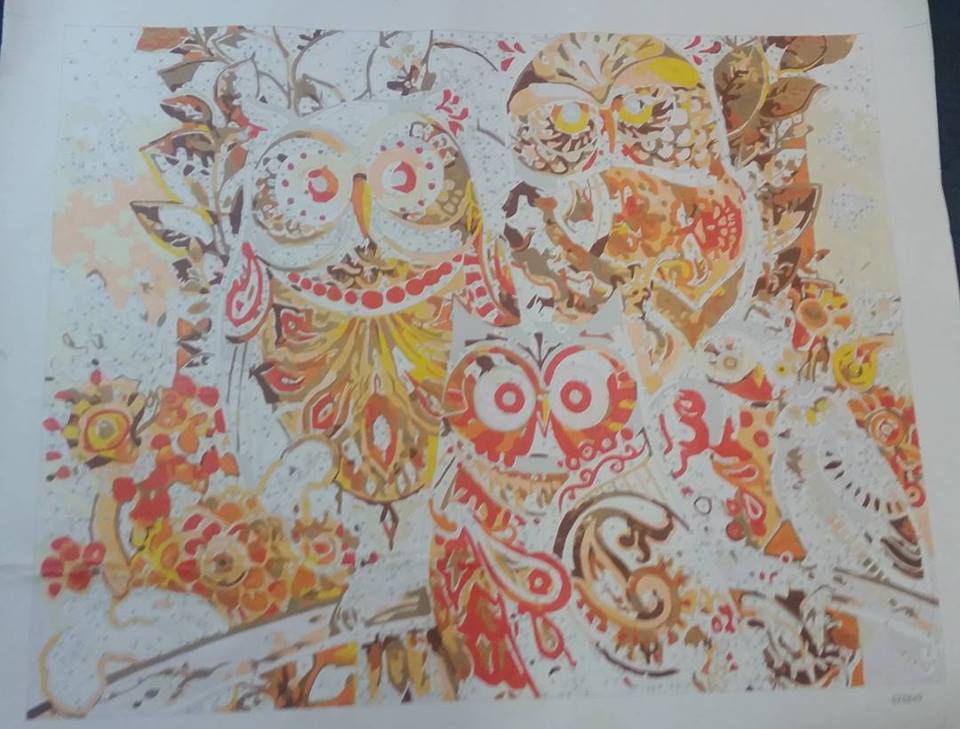 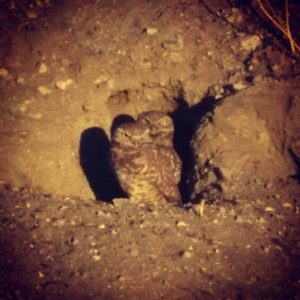 This piece will be available at La Matadora Gallery now through Jan 7, 2018. The opening is today, Dec 16, 5-8pm. The “Owlzez Party” will go for $550, with 10% of selling price going towards the Audubon Society. Anyone who purchases this will be supporting an independent artist, an independent business owner, and helping to preserve wildlife. That does make some sort of sense! 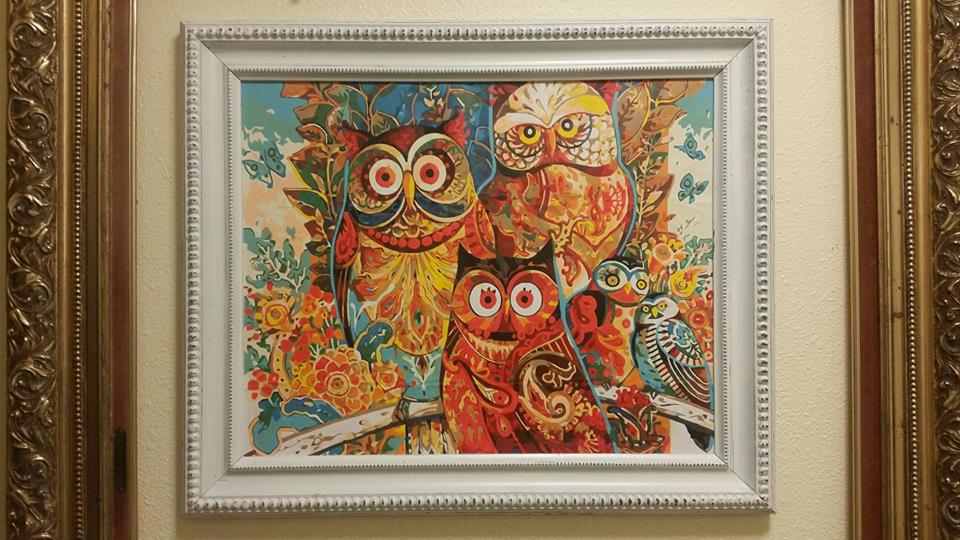