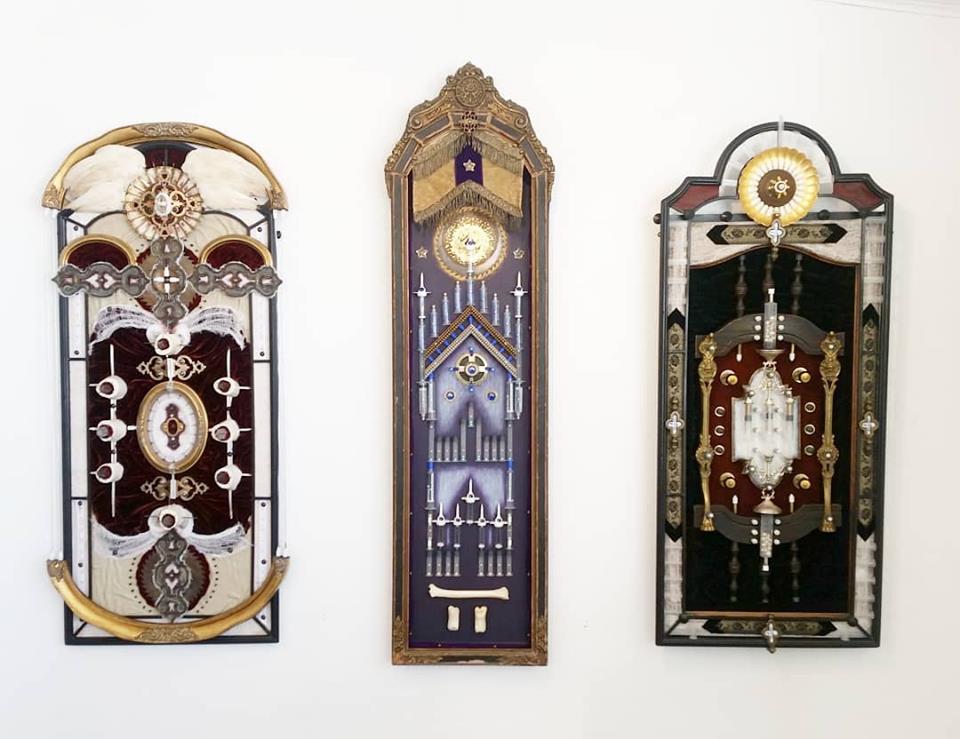 On April 19, 2019, a miracle happened. After a year of significant health issues stemming from an infected pressure wound, including 2 hospitalizations for sepsis and half of the year spent in a hospital or nursing facility, my partner Tony was finally ready to accept the possibility of amputation of his right leg at the hip, which is what the surgeon had been recommending since a failed flap surgery last August. Osteomyelitis deep in the femur bone rarely goes away. Surgery on the bone to remove the infection was impossible due to an inherited blood disorder, and some ossification that had grown over the femur. Amputation seemed to be the only way that Tony would be able to get on with his life without living under the constant fear of sepsis, which is life-threatening. I didn’t like the idea, but it sure seemed better than the alternative. I mean, his leg doesn’t work anyway. But, of course, it’s not mine.

On March 24, 2019, Tony was the subject of a 10-minute remote healing “Intention of the Week” on Lynne McTaggart’s (author of “The Power of 8”) website, which my mom nominated him for, where 3 people are chosen weekly to be the recipient of group healing energy at a specific time for specific healing wishes. Tony wished to be free of the bone infection.

On Apri 19, I went to see the surgeon with Tony, who was finally ready to discuss a list of questions he had regarding the amputation and life after amputation. Tony talked while the doctor examined his wounds, 2 of which had been connected (“tunneling,” it’s called) under the skin. As Tony talked, with his back to us, I could see the puzzled look on the doctor’s face as he was trying to find the connection under the skin. It wasn’t there. They were healing. They healed in a way that none of his doctors thought possible. The surgeon said that amputation was still an option, since the femur is no longer connected to the hip socket, and it could make getting around easier, but that he did not think it was necessary any longer. Yup, that was the true miracle.

“Medicine” is my third show as a curator at La Matadora Gallery in Joshua Tree, run by my dear friend and former Tucson gallerista Colleena Sabatino. I’ve recently joined forces with her by curating/managing every third show. I was ready to share a collection of the things I have been doing that have helped keep my sanity over the past year. And, strangely enough, this is the first time I have ever created a body of almost entirely new work for a specific show. Four of the assemblage pieces are made using medical waste that we have accumulated over this past year of IV antibiotics and wound care. It is astounding how much is created.

“Sacred Wound” was the last piece I finished, just in time to hang. That one was a beast. I remember one day when Tony came home from his wound doctor (who I strongly disliked for many reasons), his nurse noticed a sharp piece of chipped bone protruding through the wound, a likely result of overzealous debridement. I couldn’t get the image out of my head. I thought about the idea of a sacred wound, and how much spiritual weight this wound has carried for both of us. I had the sister frame to the “Tree of Life” that I created last summer (which was going in this show) and I knew what I had to do. Kind of. The process is always tricky. The figuring out of how to make things work. It’s sometimes maddening. 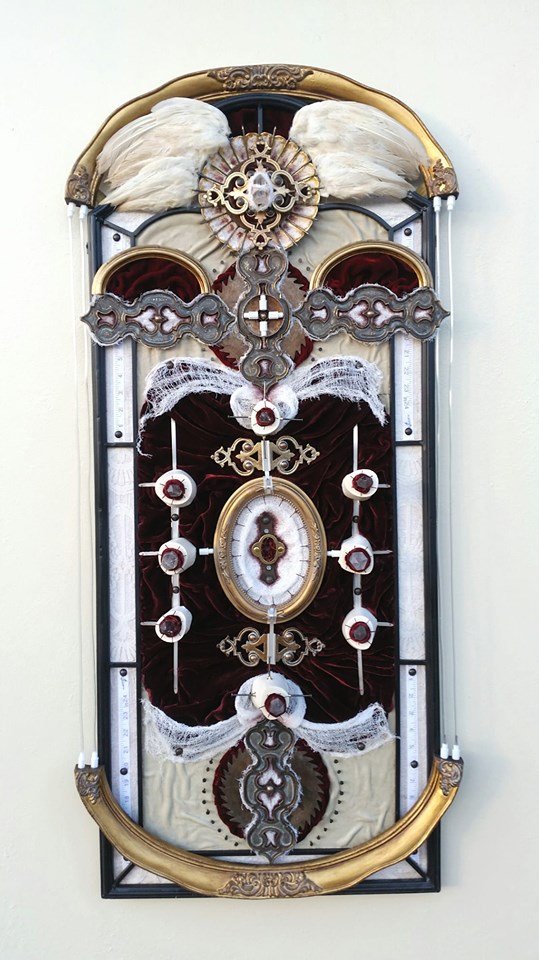 I had the bones from my old job at a restaurant in Oakland. The chef made osso buco and gave me the bones. People do that…they give me weird stuff. And I love it. The quartz crystals made the bone look more alive. The rusty saw blades, the crucifix-like arrangement of the hardware, the red velvet, the white leather, the gauze, the wound measuring tape…it all came together. The once-oval frame was now cut to cradle the piece, connected by 4 strands of IV tubing. And lots of screws and rusty nails and cold metal bits. The wings were going to be the finishing touch. These were the wings that I cut off the bodies of my Mormon neighbors’ roosters after they were shot, while the missionaries were having dinner at their house, watching me out the window. I cured them according to traditional Native American instructions that I found online. 3 out of 4 wings, and the 2 legs cured perfectly. One wing, which, of course, was one that I wanted to use, smelled bad. I was intent on getting the smell out. I washed them all (just because…might as well clean them all) in Dawn soap and vinegar, sprayed Nature’s Miracle on them, blowdried them, and that one wing just kept smelling bad. My friend Beth, who does taxidermy, told me to cut it open where the humerus bone is and scrape out any flesh, and work the cornmeal and borax into it. The show was hanging in less than a week, and I was determined. I spent hours that night in my studio with razor blades and scissors, cutting, scraping and digging. As a back-up, I went on Etsy and ordered some more. I looked for “humanely sourced” wings, whatever that means. I suppose birds do die, and what a way to honor them. In the end, I used the wings I ordered, because I actually think they worked better. More angelic. And now, after some work, magic, and determination, that one wing actually smells ok. I’ll use that pair for something, I have no doubt. 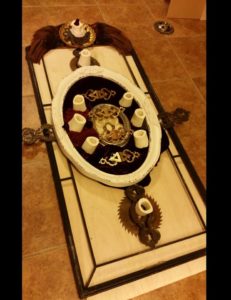 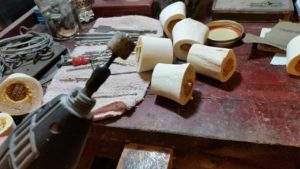 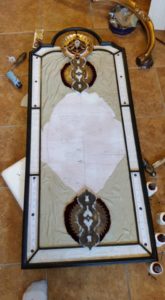 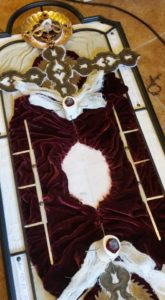 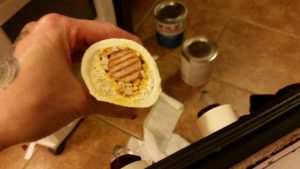 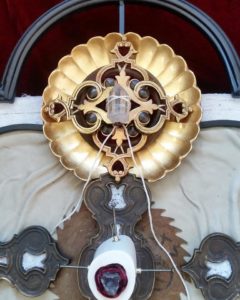 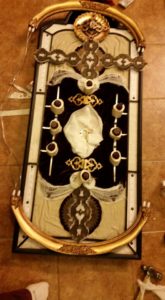 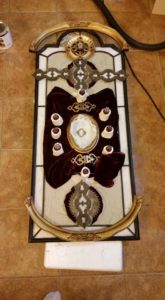 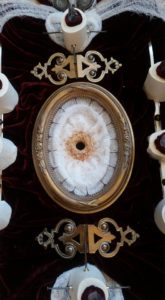 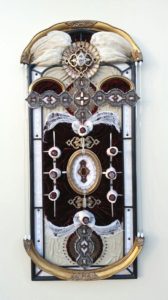 There is so much I could say about the preparation for this show. I broke new ground with my work on paper, incorporating many mediums into this work instead of just my trusty ballpoint pen. It was scary, but rewarding. Charcoal, watercolor, graphite, colored pencil, touches of acrylic paint, gold and silver leaf over clay bole all now go onto the page. The best results always happen when I push past resistance. People respond to these. I sold one original so far, and I am almost sold out of the greeting cards I made of this series before I even listed them in my online shop! I will make more, eventually. I created an installation including a vintage wheelchair that I painted and displayed boxes of medical waste. 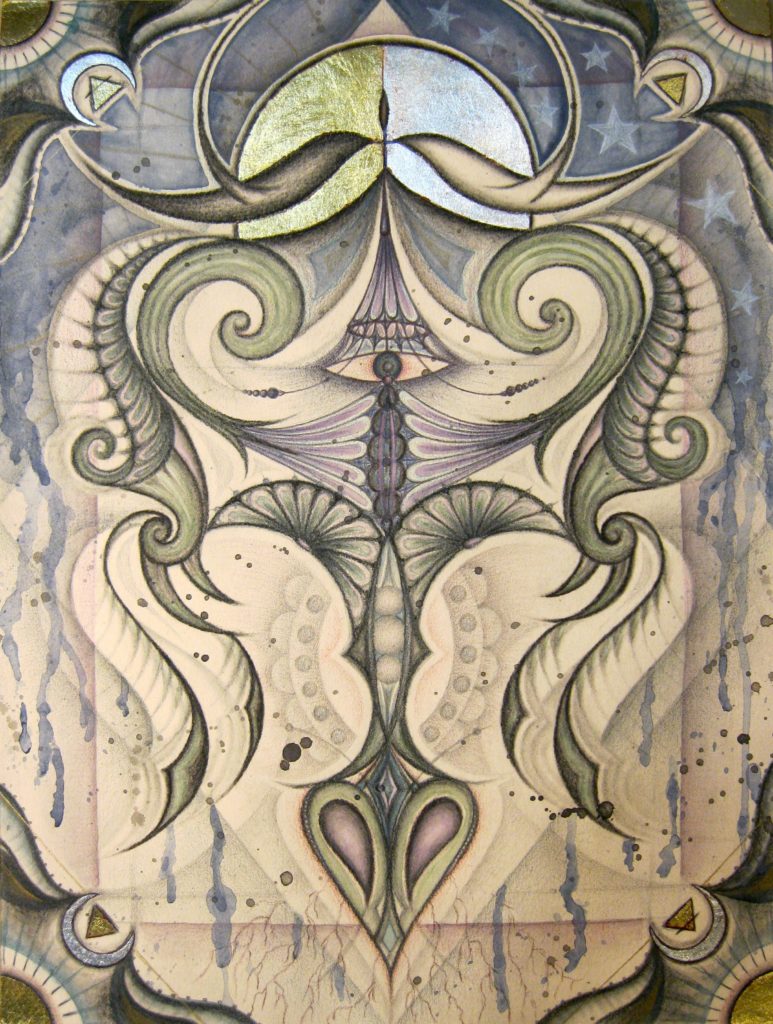 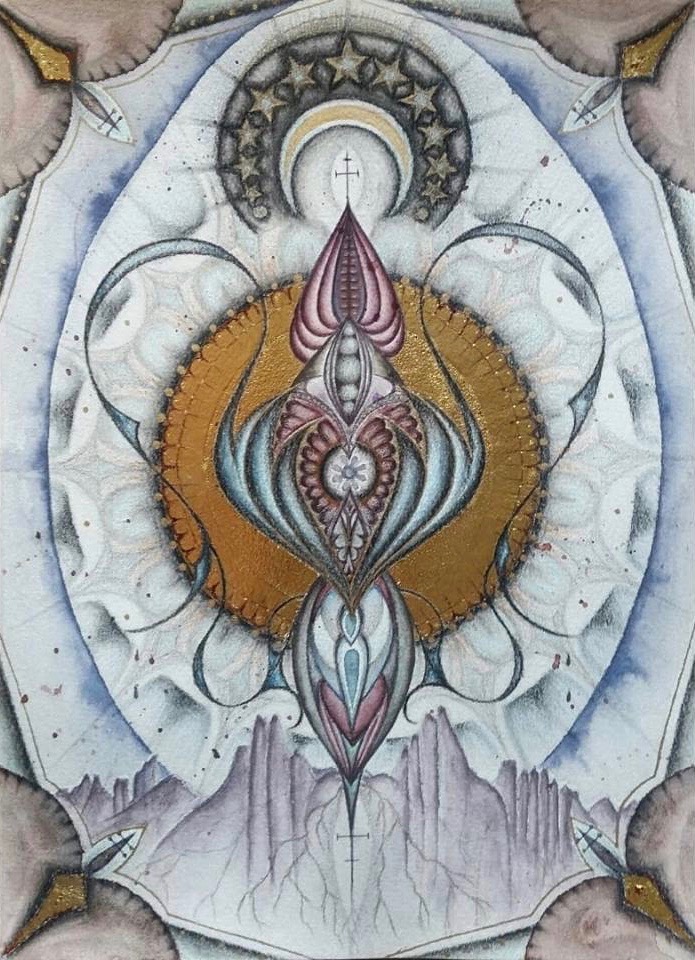 It’s been a cathartic experience to show alongside Tony after the year we have had. I’ve loved the conversations that have taken place at the gallery about the exhibit, with friends and strangers alike, many who have opened up to me in surprising ways while I’ve (wo-)manned the gallery. 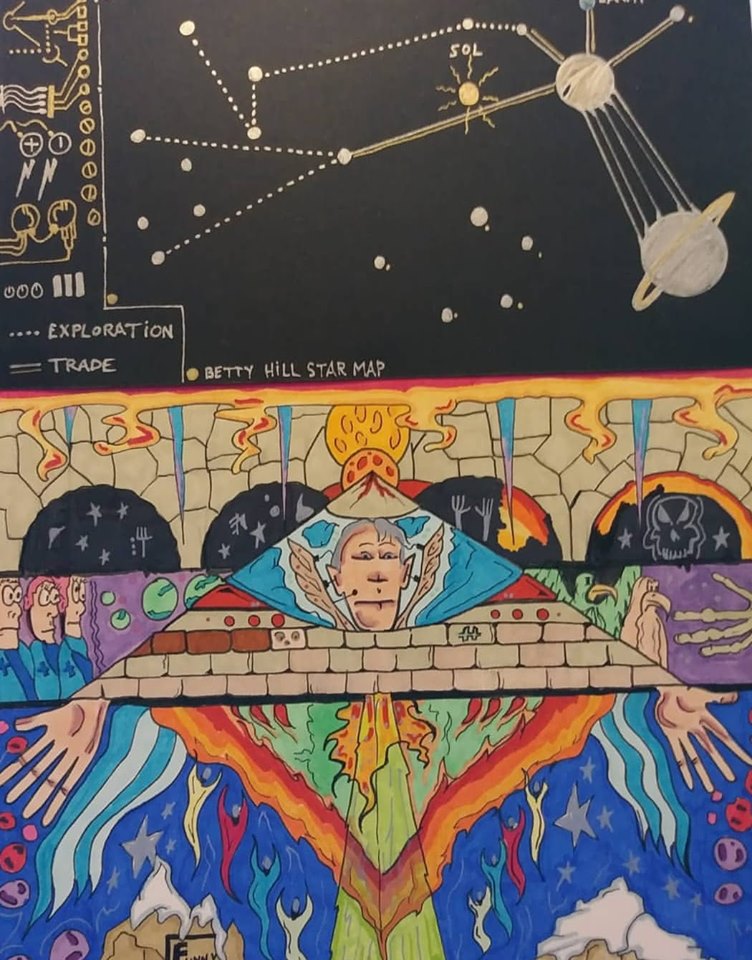 I invited Racheal Rios from Tucson to show along with us, and her work is a perfect complement to our styles, rounding out the show with her monochromatic large-scale charcoal drawings. Many people have mentioned ayahuasca when looking at her work. I asked her about that, and she said that the 7-foot wide jaguar drawing was inspired by a friend’s vision that he relayed to her upon returning from a ceremony in the Amazon, hence titled, “He Had a Vision.” 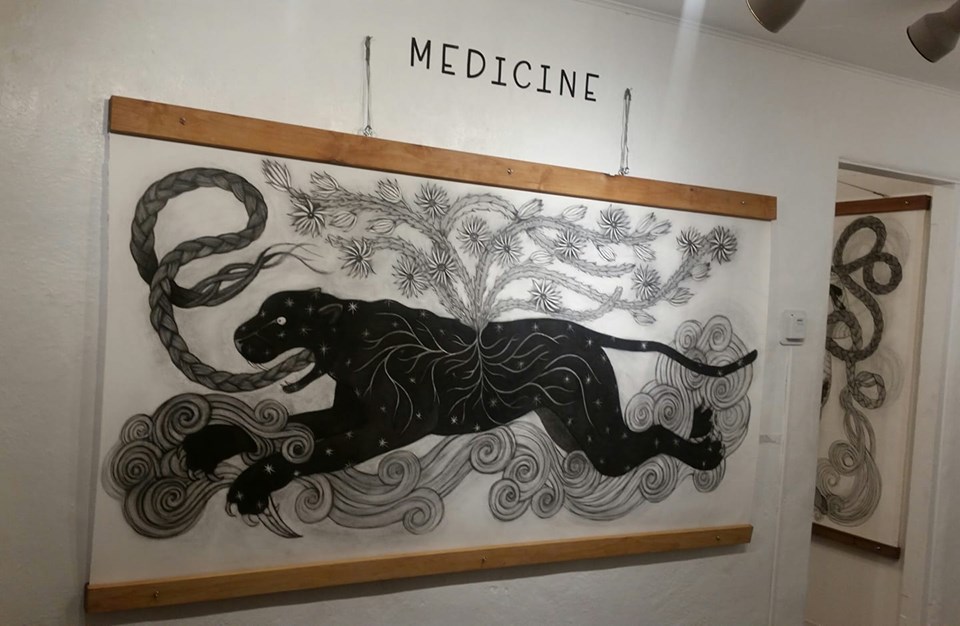 “He Had a Vision” by Racheal Rios

“Medicine” runs through July 7 at La Matadora Gallery, located at 61857 Highway 62, in Joshua Tree, CA. Gallery is open Fri – Sun, 12-5pm, and by appointment. Contact me for inquiries. See below these images for my curator’s statement: 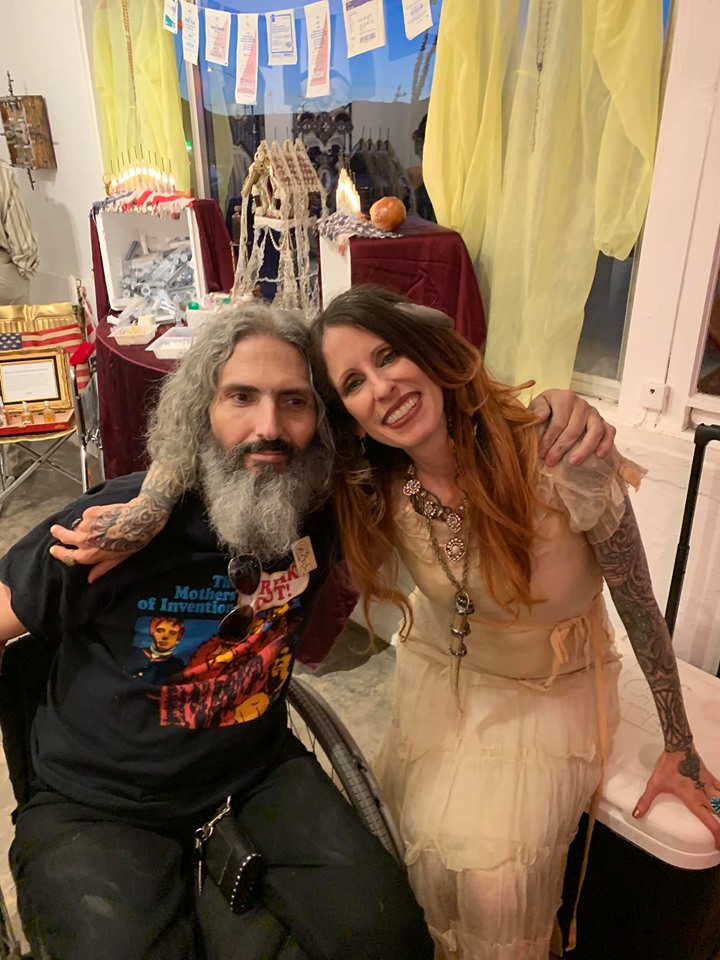 Photo by Nancy Hunt – Tony Buhagiar and me!! 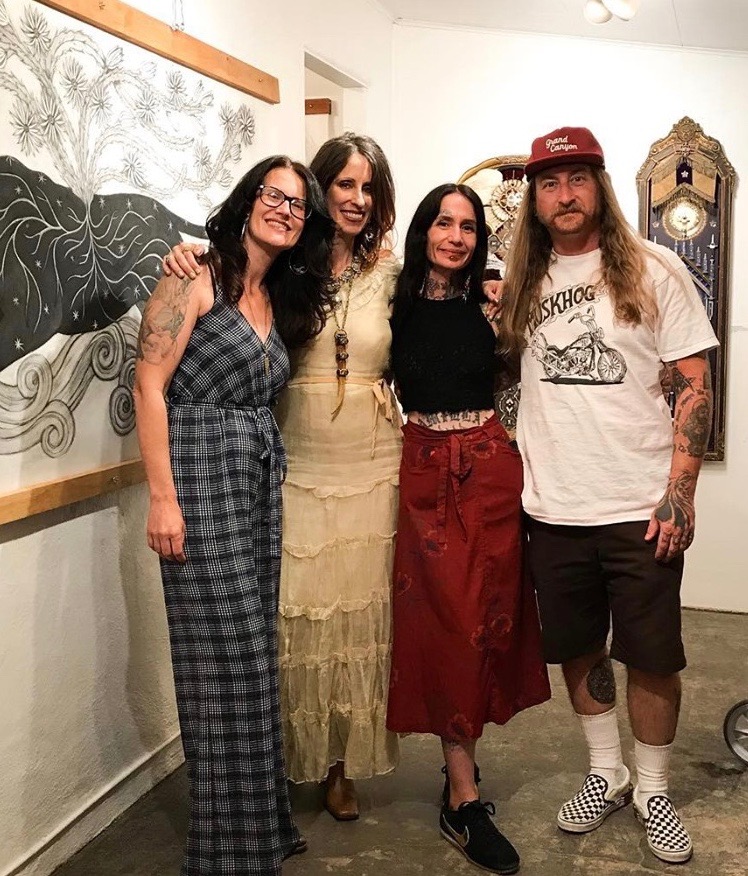 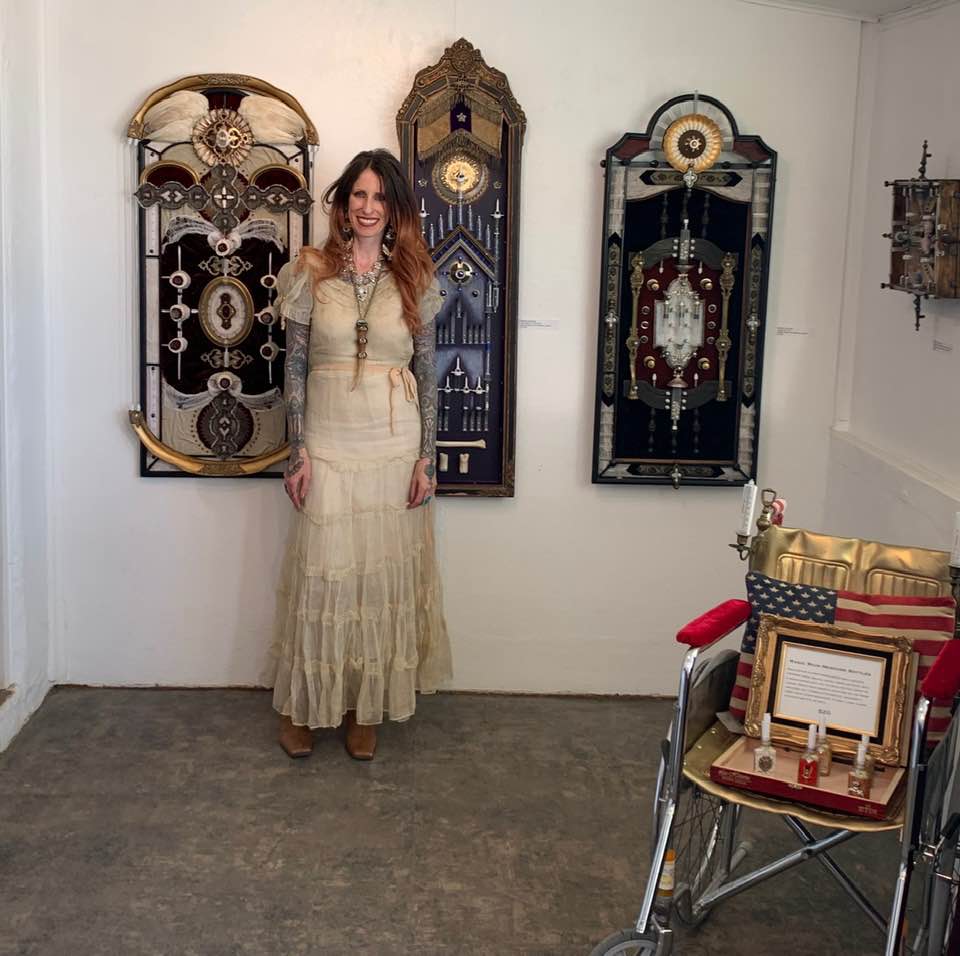 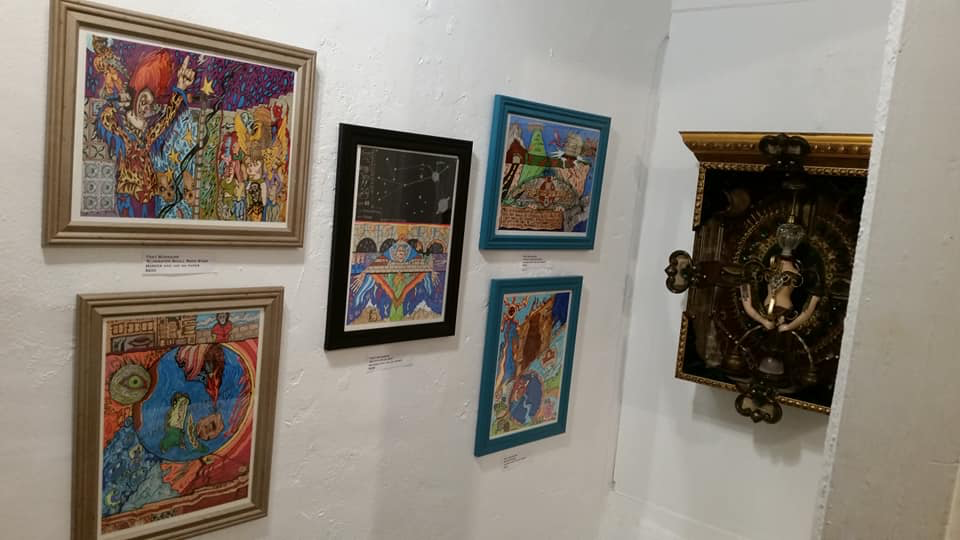 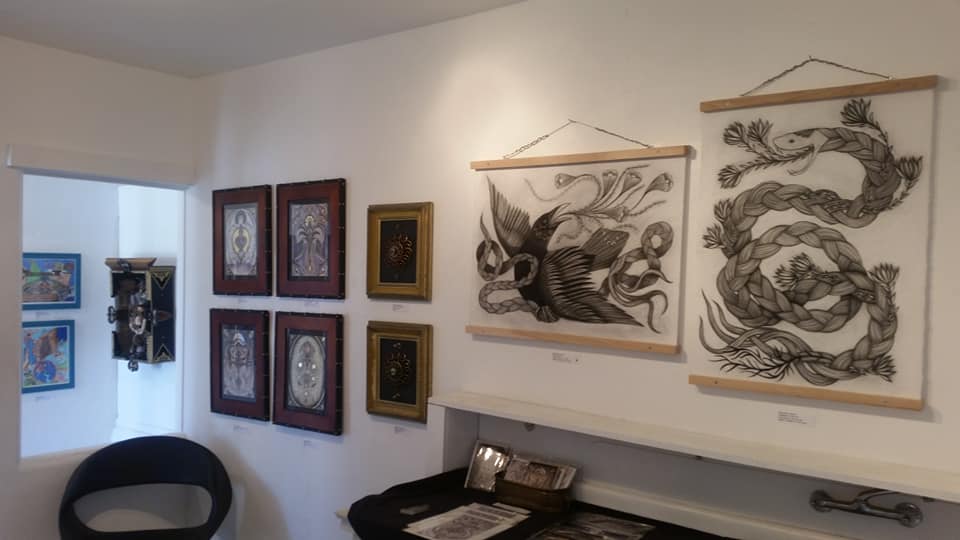 Here is my “Curator’s Statement:”

When I put together this show, I didn’t have a particular theme in mind. I just knew that I wanted to show my new work alongside my partner Tony Buhagiar’s work, as he and I have been through a lot together over this past year. Racheal Rios is someone I knew from my time in Tucson (2001-2005) and I’ve always been in love with her work. One of the perks of social media is being able to watch the growth of others as artists, and to be able to immediately contact them, even if you have lost touch over the years. So I reached out and asked Racheal if she would like to show with us at La Matadora, and here we are. A spark of synchronicity happened in March, when she and I both had work in a large group show at esteemed Los Angeles gallery La Luz de Jesus, with over 70 artists. When we walked in, my piece just happened to be hung directly above hers. I felt the universe was speaking to us, and that wasn’t random coincidence, affirming our path. And once again, here we are.

I woke up one morning with the title Medicine in my head. It seemed perfect. Much of the work that I have been producing, especially my assemblage work, has been related to the caregiving I have been doing since Tony’s release(s) from the hospital. The medical waste has played a starring role as material in my work. Some of it, as in “Tree of Life,” alludes to the healing powers these pieces of disposable plastic once held, while others, such as “Wheel of Fortune, American Style” speaks more to the randomness of our healthcare system in the U.S. My work on paper has more occult-leanings, offering the tonic of a visual vehicle with which to cross between worlds. Tony’s drawings seem to me like a form of medicine for him. There is power and freedom in being able to use a pen and paper when health and circumstances dictate that not much more is possible, at least for a while. Racheal’s work evokes the spirit of animal medicine, or the keen sense of awareness that may come when a certain animal crosses our path. Her work embodies the spirit of the animal, including the human animal.

I hope that you enjoy the show and that being here in some small way affects the well-being of all who enter…hopefully for the better! Cheers!