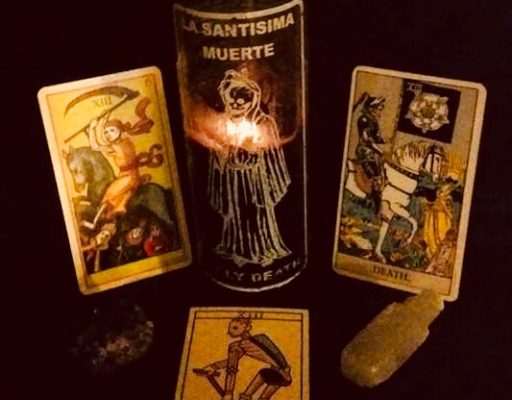 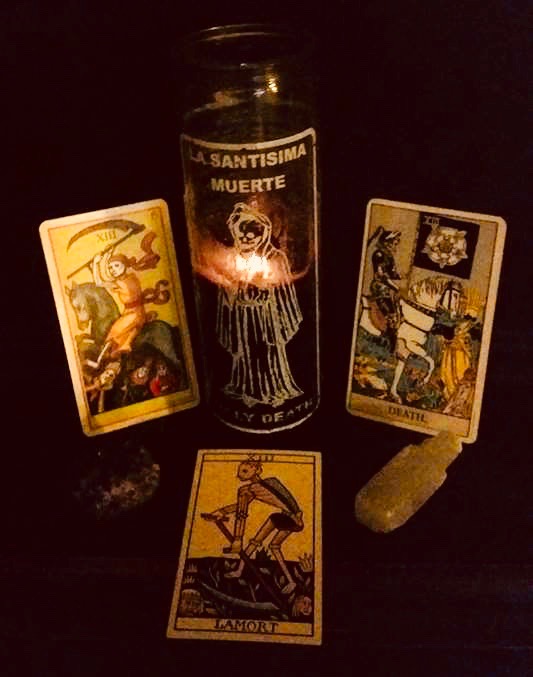 I just went to a talk at a local gallery/gathering place in Joshua Tree called the Beatnik Lounge where I heard 3 different writers talk about their work and their creative process. One man talked about the thing that seems to be sorely missing in the creative process in these days of social media and instant gratification. The part where we sit with our work, and let it be. Let it percolate. I believe he even used the word “ferment.” Creativity is not always doing. Sometimes it is observing. Sometimes it is clearing our minds so that new ideas can enter. Sometimes it is letting our project rest so that we can see, with fresh eyes, what it is supposed to become. This was timely, as it was my first outing after being sick for 10 days, 10 mentally challenging days of letting my body and my work rest.

Over the past few months, my creative output has been minimal. My boyfriend was hospitalized with severe sepsis and I was intensely caregiving for him, as well as teaching music part-time to grade-school kids. This took up a whole lot of my physical and mental reserves. School is now out for the summer, and my boyfriend requires a bit less care as his health has improved somewhat, so the juices are starting to flow again. The past couple weeks, however, I’ve been sick, which came on at the tail-end of finishing up a piece for a cactus-themed show at La Matadora Gallery in Joshua Tree, for which I pulled an all-nighter. I worked through it, but that piece took it out of me, and I named it, aptly, “Hollow.” That’s how I felt when I was done. That’s how I’ve been feeling a lot, lately. 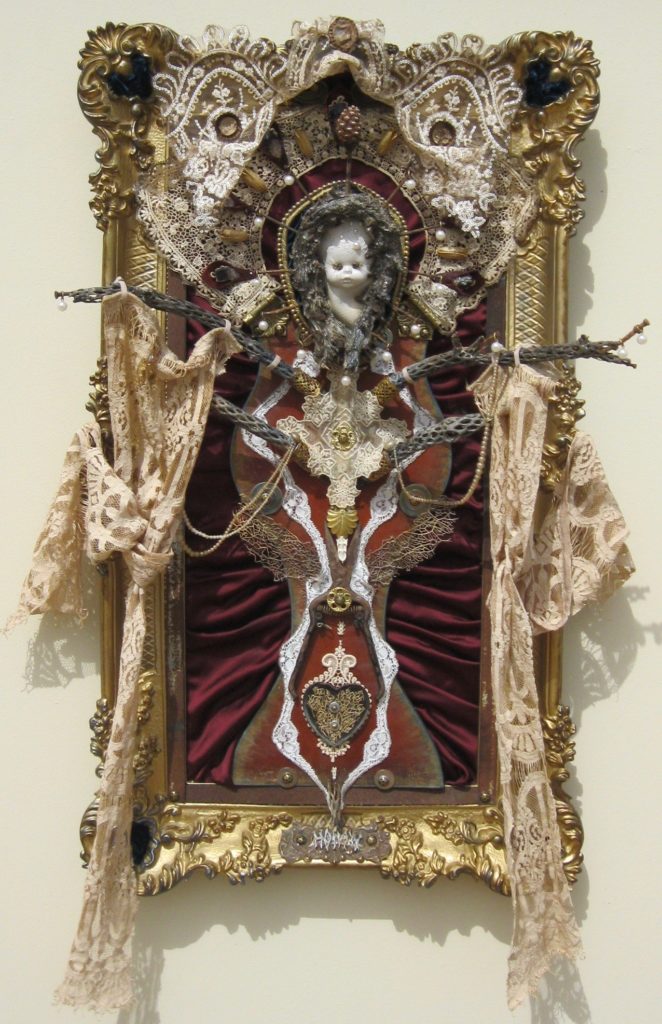 I’ve had a lot of time with my thoughts. Throughout all this, the subject of Death has been in my consciousness, on many levels. Living with death.

“When death comes, little remains to be negotiated.” – Camelia Elias from her book “Marseille Tarot.”

Every day we die a small death. Every day something that was, is no more. Every time I, or you, create a piece of art or music, the potential for that piece dies. Poof…gone. Each new line on my face means the death of collagen cells, which once smoothed this increasingly rugged terrain. Death is everywhere. Yet the sun continues to rise. Life persists, even feeding on death. I remember an old yoga teacher of mine talking about the goddess Kali, the destroyer, known for her necklace of skulls, and referred to her as really the most compassionate of all the dieties. She knew when something was done, and got rid of it, even if we were unable. She made it final.

I’ve had a lot of reminders of death recently. My boyfriend’s diagnosis – severe sepsis – upon reading about farther, I discovered has a 40% – 60% mortality rate. It didn’t get him, but he is far from healed. It’s still sinking in for me just how close he was. You’d think we would know he was dying, but death can be sneaky. My cat was attacked by a wild animal, which resulted in only a couple deep scratches that needed antibiotics, but nothing worse, thank goodness. Another close call. Rabbit corpses began showing up on our property, which I suspected, and then confirmed, were the result of my neighbor’s poisoning regime, due to the rabbits peskily eating his cacti. Our dear friend Stacey Rawlings was quickly taken out by cancer. Another relative, who I still never figured out exactly how I was related to after all these years, passed a few days ago. She was kind of in between a grandmother and an aunt to me, and she pretty much introduced me, an east coast girl, to Los Angeles when I was young. She will be missed by many, including me. And of course, there are the recent high-profile suicides of both Kate Spade and Anthony Bourdain. Now the heat of the desert summer is beginning to make its presence known, killing off the last remains of the previous season with its scorching embrace.

Death is messy. Death doesn’t smell good. During this relative creative down-time, I have managed to salvage some bones from some of this death, for supplies. Rattlesnake roadkill, poisoned rabbits, wings and feet from my neighbor’s roosters that he shot in order to introduce a new one to the hens. Nature takes care of some of the decomposition process, with insects eating away the flesh. I covered the rabbits with chicken wire, but some creature got under it and took parts. Parts of a poisoned rabbit. So the cycle continues. This is from an Instagram post I made a couple weeks ago, regarding the rabbits and the roosters – “…Every action has a ripple effect. I sit and wonder if the quiet I’m hearing here in the desert is due to the heat, or if it’s because our animals are being poisoned… My neighbor (then) asked me if I wanted come over and get some (rooster) feathers for my art. That was thoughtful. He is Mormon. He was having the missionaries over for dinner, while I wrestled with the dead roosters in his yard. ‘Man’s dominion over animals’ is a sentiment that I don’t agree with, an excuse to behave selfishly, yet it has given me material to work with. I told his wife I would honor their birds, whatever I ended up doing with them. She seemed sad that they were gone.” 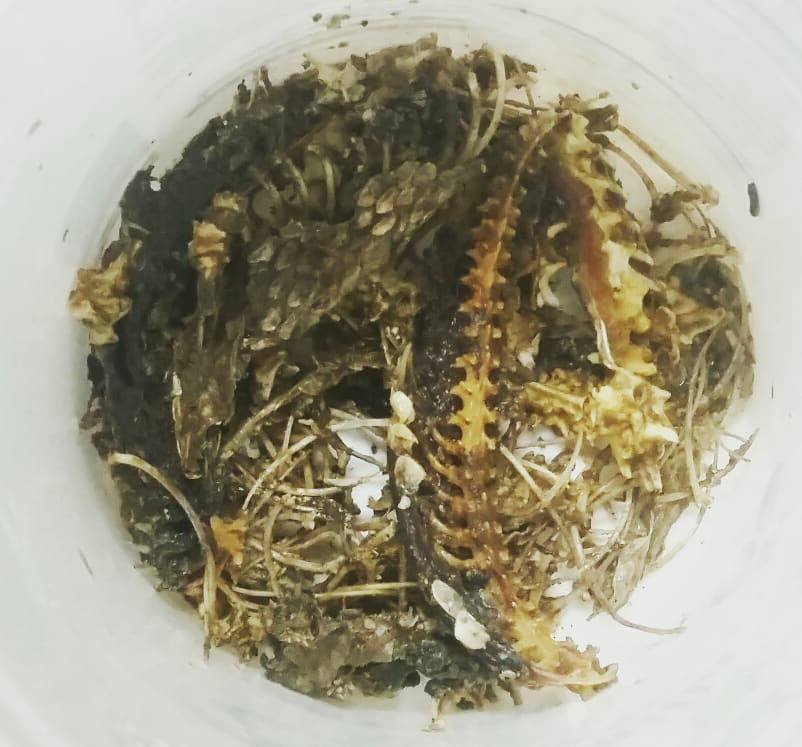 So now I have the fleshy skeletons macerating in buckets of water outside my studio, with the stench occasionally wafting in, and the wings and feet of the birds resting in a box of cornmeal and borax. It’s not pretty. But the cleaned up results are beautiful and elegant, the pure essence of form, sharp and precise. It’s funny how many of us would rather not acknowledge the unpleasant process that allows this to happen, which begins with death. I have a friend who asked that I not post pictures of dead animals on Facebook (which I occasionally do with the intention of utmost respect for the animal, as sharing part of my artistic process and inspiration) because she finds it disturbing, as I’m sure many do. This friend has also given me bones. Where is the line? Bones are essentially de-fleshed dead animals. Where, during the process, does it become acceptable to see? Palatable? Why have I read somebody post that they will delete anyone who posts pictures of animal abuse, yet their next post will be a recipe for meat, which is often the result of horrific animal abuse, especially in this country? I have no interest in being judge or jury as to what is right or wrong, but there is a thread of hypocrisy, or perhaps willful ignorance in the name of self-preservation, that we all are most likely guilty of on some level. We don’t like suffering. We don’t like the messiness of death. 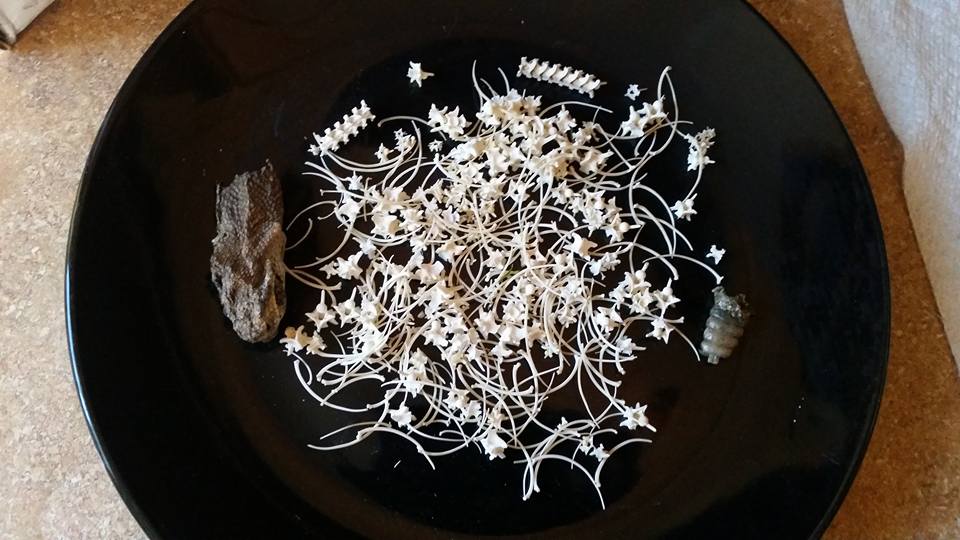 There is also a beauty to the rhythm of the connectedness I feel to the cycle, at times. A certain relief in acknowledging and touching the ugliness of it, and being ok. Here in the desert, I don’t have to conform to the neatly packaged version of what is acceptable. Nature is my backyard. Cactus skeletons dot the canyon. I’ve seen lots of blood recently. This is my reality. Blood that has had to be replenished by transfusions, at times, because the clothing and towels that I’m rinsing out in the sink almost daily have captured the precious iron-rich fluid that is supposed to be in my boyfriend’s body. It escapes through an opening that taunts us with its threat, refusing to close. The water swirls down the drain, washing away the evidence, sometimes deep red, sometimes pink, sometimes brown, while the buckets of macerating bones sit outside the door, and snakeskins dry in the sun. The washing machine and detergent chase away the remains lingering in the fabric. Most, but not all. That’s ok. We know what was there. Being a force of life that perseveres through this messiness is liberating. I am not separate from this. This will be me. This will be all of us. And that’s ok.

“Life and death are one thread, the same line viewed from different sides.” Lao Tzu