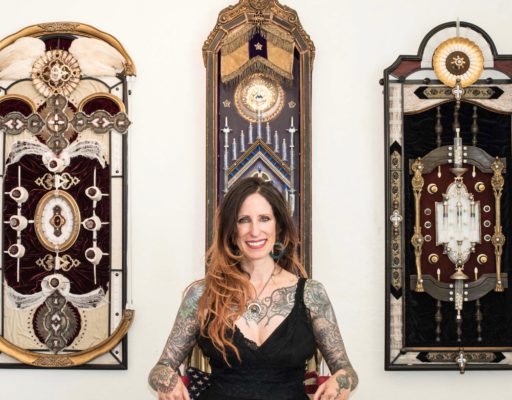 I’ve never fully believed those who say things like, “I just make art for me.” Of course, that’s how it starts. But that’s not where it ends. Sometimes it’s difficult to create a body of work when there is no clear end goal – what will I do with it when it’s done? Will I be able to have a gallery show? Where? How? When? Who will see it? Anyone? Part of the reward, for me, is sharing the work, and hoping that it will speak to others. How will they respond? What will they see in it? How will they bring their own stories to the work? Will they get the narrative created by the body of work seen together that would be missed by seeing one individual piece on its own? As I do a lot of group shows, which are great in their own right, I sometimes feel that much of the story and the context is missing.

One of the joys of being a co-curator at a gallery is that occasionally I can take over the space with my own work. Since none of the other galleries that I’ve shown at or reached out to were responsive, last June, I gave myself a show at La Matadora Gallery in Joshua Tree! I felt it was time.

This was the first show that I’ve done, ever, I believe, where I intentionally created a body of work specifically for the show. It was exciting and very challenging. I did a new series of icon-inspired work on paper, which I fell in love with. And I created a series of medical-waste assemblage altars, which I started the previous summer with the Tree of Life piece that I showed at the Desert Icons show. I had the matching frame, so I created another beast called Sacred Wound to flank that piece, with a tall, narrow syringe-church piece in between, called Houses of the Holy. I did a medical waste installation, as well. It seemed only natural to call the show Medicine. My partner Tony Buhagiar (who most of this medical waste came from) and friend Racheal Rios from Tucson showed their work as well, filling out the gallery with several different takes on the theme of “Medicine.”

6/16/19
On Father’s Day, the show had been up for about a week. A family came in the gallery. The father, decked out in some fabulous Native American style jewelry, was in a wheelchair and was immediately drawn into the show. We all talked for quite a while, and they told me that he was in an assisted living facility in Yucca Valley. I believe he said that he made jewelry. At one point, his wheelchair caught on the wheelchair that was part of the installation, and we all had a good laugh.

After they left, I realized that after only one week, several people have opened up to me in the gallery about their experiences with the health-care system and/or caregiving. I decided it would be a good idea to start documenting these conversations that were happening at the gallery as a result of this work. I only wish I had started sooner! I began taking pictures of the people I had these conversations with, and unfortunately, some of them got lost. But I will share the stories with you (with permission) that they chose to share with me.

One kind man named Archie came into the gallery, looked at the show, and then made himself comfortable in a chair and started opening up to me about all kinds of things. After we had been talking for a while, we decided we should probably introduce ourselves to one another. He didn’t have a specific “medical” story, but I felt that the rawness of the show stripped down some of the normal barriers that exist and made our conversation get deep immediately. I saw him later at an event at the Art Queen and asked if I could take his picture, which I sadly cannot find.

Kimberly Sonntag, a young blonde local who stopped in, told me she used to be a trauma nurse. She was quite familiar with the complications that come with being paraplegic and getting pressure wounds. She is now in the Marines, as there is a large base in 29 Palms, but looking at some of the stuff in the exhibit made her think about what she misses about being a nurse. She says she will go back to it someday.

6/22/19
Joe Alvarez, a local artist who has shown at La Matadora before, and his wife Erin Campbell (who has a fabulous line of fancy little girl’s dresses called Lover Dovers) came into the gallery today to see the show. They told me the story of losing their baby at 1 month, due to a troublesome 3rd chromosome. Today was a few days after the 4th anniversary of losing their baby, Simon Patrick. I was touched that they shared their story with me, honored that perhaps being in the gallery inspired a sense of trust and understanding, and I almost cried.

Later that day, a young couple from Wilmington, NC, came into the gallery, named Lauren and Schuylar. Lauren has an online clothing shop called Hexed, with a very cool IG page. She just kind of wandered into the gallery alone, and after looking at the work said that she was going to get her boyfriend so that he could see it. When she brought him back, he told me that he is diabetic and gives himself daily insulin shots. He talked, also, about his stepfather having early onset Alzeheimer’s and how poorly he was treated in the nursing facility. That seems to be a common theme and it made me sad to hear. Lauren then bought one of my prints and I was very happy to have made the connection.

6/23/19
A sweet couple named Jon and Tania came in today who, after looking around and asking me about the story behind the show, told me about Jon spending 11 days in ICU because of an abscess on his lung. After being released from the hospital with a PICC line, he was on IV antibiotics for 3 months. It sounded like quite a scary time for them. He is quite healthy now, but it seemed unnerving how unexpected that was. They started telling me the story of how they moved to the desert, and it sounded really familiar to me. Have we met before? Hmmmm…then I remembered hearing Jon speak at Desert Stories, an annual event here at the Hi-Desert Cultural Center where several desert dwellers are chosen to read their very own desert story. I remembered. They have their own blog – jonandtania.com. I told them about Tony and his bouts with sepsis, and showed them his work in the hallway. They told me to tell Tony that people who don’t know him appreciate his work and are thinking good thoughts for him. That felt good. Tony’s drawing titled “Betty’s Star Map” was their favorite. That one later sold.

7/5/19
Today a mentally disturbed man came in the gallery who told me he had been in active military combat since he was 11, and that he was now head of security at the intersection in front of the Joshua Tree Saloon. He was also a 3 percenter (as opposed to a 1 percenter), meaning, according to him, that he as a member of 3 different rival motorcycle clubs (which, of course, we all know is impossible.) He said the fact that he was wearing red, white, black AND green proves it. I’m used to strange people, having tended bar (sometimes alone) for years, but this guy seemed like he could snap on a dime. I was on edge and wanted him to leave…which he did, but then came back. Fortunately, it didn’t take long for him to leave the second time.

So when 2 large, intimidating looking men named Gabriel and John came into the gallery, I was quite pleased. I doubted he would be back with them around. Gabriel scanned the gallery and then told me about his mom dying of cancer not long ago, and how quickly it took her. She was 83 years old, and was extremely healthy. She ate only organic food. She never ate anything out of a can. That was one of the reasons, apparently, that the cancer took her so quickly. She had it for quite some time but didn’t even notice, presumably because she was in such good health aside from that. He helped in caregiving for her at the end. He was hesitant to let me take his picture at first, and when I told him that I didn’t have to, he agreed. And now, dammit, I can’t find the pics! But they were good.

There were more brief encounters like the ones I mentioned above. I’m glad I had the chance to share a few with you, whoever may be reading this right now. I often ask myself why I create, and what do I want to get out of it? Why is it important? Connections. If I can create something that triggers an opening up in someone else as a result, I have succeeded. This show was rewarding in so many ways (all 3 artists sold work, which is always a plus!) Looking back, I feel very fulfilled in knowing that something that I brought to life out of a painful situation touched many others who saw it and had been through similar experiences. Art can be a bridge.

Joe Alvarez & me right before he took over the gallery for his Clowns & Lobsters show!